September’s “Hello Sendai” topic is natural disasters and disaster prevention, and we are reminded to check our disaster provisions as we head into Japan’s typhoon season. Tyler, Paige and Elza share valuable disaster information such as where to go during a disaster and some advice on being prepared for any disaster that may strike.
Disasters can happen anywhere at any time so it’s important to be conscious about being prepared. 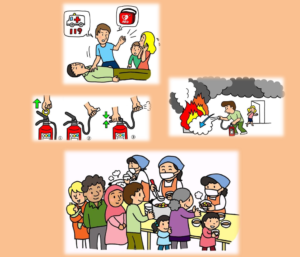