The contents of “Sendai Multicultural Center News” have changed starting from this edition, with 6 languages now being supported (Japanese, English, Chinese, Korean, Vietnamese, and Nepali).
There will be 3 editions printed this fiscal year, each including information useful for the daily lives of non-Japanese residents. 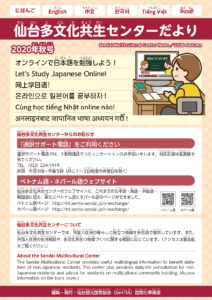