Hear explanations about how primary schools are in Japan, rules, what you need to prepare, money, the role of parents, what is different compared to schools in your own country, studying Japanese, and programs for supporting children who come from foreign countries.

If there is anything you do not understand, you can ask questions to primary school teachers and non-Japanese parents who have experienced raising children in Japan.

■Aimed At：①Foreign-born parents and their children who plan to enroll in a public primary school in April, 2020

■Application：After filling out the application, email it to the following address:

r-ou@sentia-sendai.jp（ You can also come directly to SenTIA）

You can also get one at the Sendai Multicultural Center 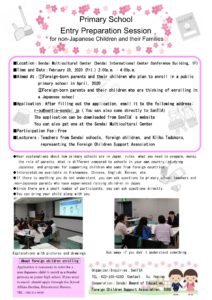