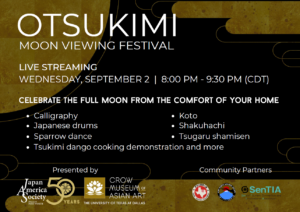 The Otsukimi Moon Viewing Festival which is held every year in the City of Dallas (state of Texas in America), an international friendship city of Sendai, will be broadcast in an online video this year!

This event is organized by the Japan-America Society of Dallas/Fort Worth and part of the video is planned to be streamed live (real-time broadcast) by the City of Dallas.

There will be lots to see, such as a performance from a Japanese drum group which is active in Dallas and a demonstration of Otsukimi dango cooking (Japanese sweets served during Otsukimi).
There will also be special performances from Sendai, which include the Tsugaru shamisen player and Sendai native Sho Asano, the Suzume Odori (Sendai sparrow dance) group Date-no-Mai, and the calligraphy club from Miyagi Prefecture Miyagi First Senior High School!

How does everyone in Dallas enjoy the traditional Japanese cultural practice of Otsukimi? Experience the event while watching the video along with everyone else!